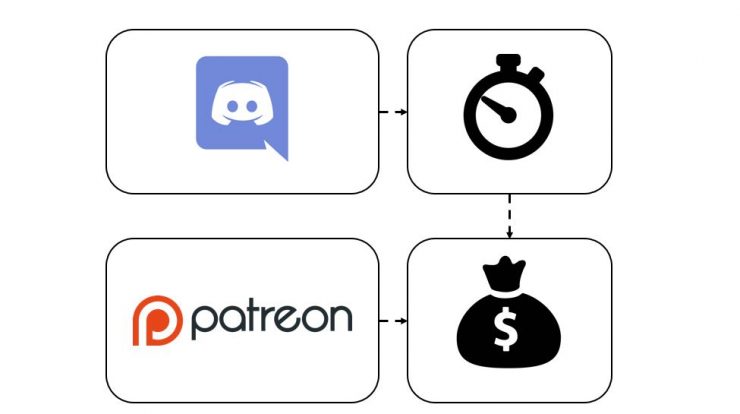 As a game developer, it is often not easy to get your hours back. Platforms like itch.io or HumbleBundle allow the developer to upload his game and collect some money for his demo or his small game according to the “Pay what you want” principle.
But what if these platforms are used to make potential customers aware of the game, give them a foretaste and finally encourage them to buy the game a few months later at a voluntary full price?

Through Discord, a level system (find a manual here) and Patreon, a payment system, this is possible.

Attract your customers’ attention to your game

First of all, the customer has to be found, the product has to be pointed out. The pages mentioned in the introduction offer indie developers the chance of a comparatively large reach without a lot of money. (Example)

The goal is now to let the users play the trial version of the game. Without ever having seen the game he already has the possibility to buy the game here, but only very few of them are willing to accept this offer, after all they are here to be convinced by the demo.

One or two hours later the game is over and now the customer has a taste for it. He wants to continue playing. So far nothing new. Where other game developers now ask for a donation to buy the full price game, this method only begins. There is no expectation to sell the game directly. Instead, the Beta Key, which can be worked out, is pointed out dearly and nicely. In addition, the player joins the Discord Community and earns points by writing with other players. With other players who are also interested in the game.

Points for interacting with other customers

Here we are now. Write with other users to get the free beta key with enough points. But not the full price game. That still has to be bought. With increasing number of points the level increases. In this case a Beta Key could be requested with level 30:

Level 30 – Get a FREE itch.io key for the Closed Beta of Forager!

A closer look at the FAQ reveals that it can take quite a while until this level 30 is reached:

How long does it take to reach level 30?

About 2 weeks if you chat in the server for 5 hours a day. Use !rank to check your current xp and rank.

Of course, there are other small favors like access to the concepts of the game or own emoticons. Free according to the philosophy of giving, giving, giving and only then taking. The user should be encouraged that it is not far to the free key and small successes should keep the motivation above.

In order to get points, the messages are counted per minute and added to an account. Every message no matter which character length counts to it. With a command the current level and the progress can be determined at any time:

After half an hour of chatting, I reached level 2, but a small analysis shows that my efforts to write every minute and gain experience meet an exponential function. The following data comes from other players who, like me, have displayed their current level in the public chat above. User Josie writes: ” [I] have been here for some weeks, but only lvl 23.”

Time or money – in the end, money

Many books on sales on this blog talk about consistency and commitment. Once decisions are made, which can also be wrong, they tend to be self-sustaining because they are able to ‘take root’.

So, along with thousands of others, they are now competing to write about the game and other topics. There are extra rewards when screenshots of the game are shared or even fan arts you have drawn yourself.

Once the user has put a lot of effort into collecting, he can see his achieved levels and all the others who have already made it. This makes him believe that it is possible after all. If necessary, you can still abbreviate to the payment method patreon. Since the beta key isn’t simply released, reaching it is, of course, an even nicer feeling.

If you like the game, you have to buy it in the end, because the beta is not the perfect game again…

A ship is always safe at shore, but that is not what it was build for.